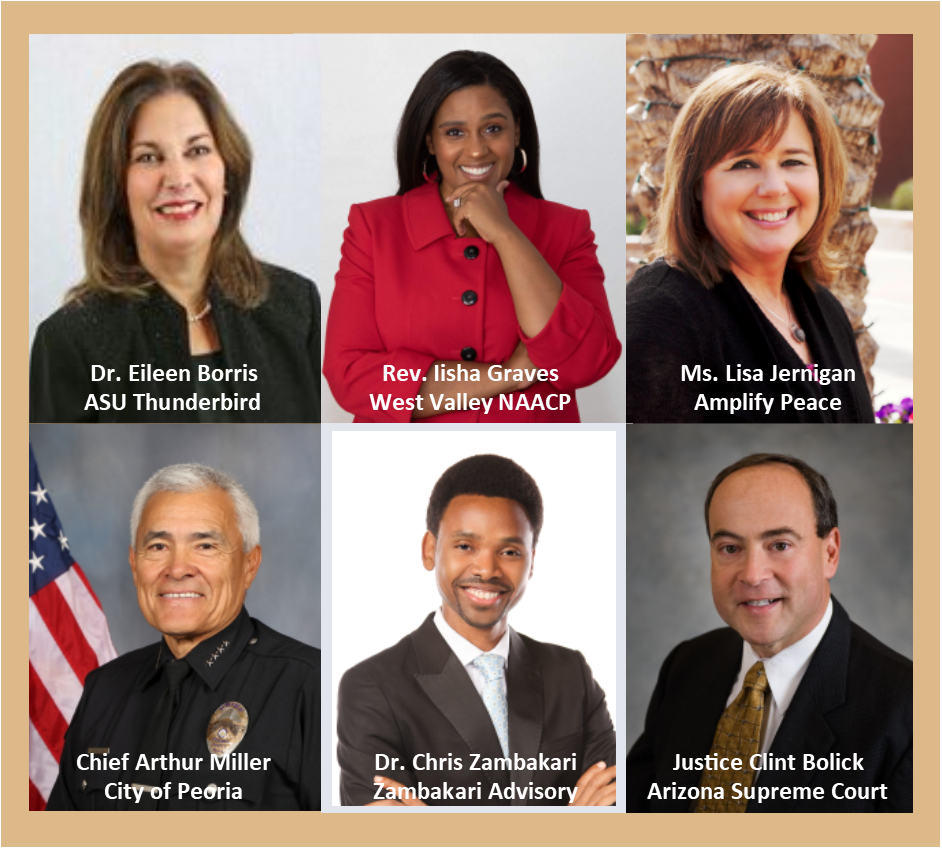 Whose Peace, Which Justice? Dr. Christopher Zambakari will discuss the politics of building peace in divided and polarized societies around the world by exploring heated public debates on questions about how to build more just and peaceful societies and the role of former enemies, perpetrators, victims, beneficiaries and survivors and perpetrators in the new political dispensation. How to resolve the tensions between making peace and promoting justice? What are some of the lessons learned about waging peace and justice in the aftermath of injustice and violence?

Dr. Zambakari is a South Sudanese-American, who immigrated to the United States in 2001 as a refugee from South Sudan. Christopher has built a strong foundation as a visionary leader, scholar, international consultant, and speaker. He is the Founder and Chief Executive Officer of The Zambakari Advisory and Co-owner with his mother of Desert Haven Home Care, a Senior Care Home in Central Phoenix. In 2013 he was sponsored by The Sun City West Rotary Club and awarded the Rotary Peace Fellowship to study peace and conflict resolution at the University of Queensland in Australia. For his Applied Field Experience, he worked on peace and mediation support in the Middle East and North Africa with The Berghof Foundation in Germany.

The Judiciary’s Peace-Keeping Role. Justice Clint Bolick will talk about the role of the American judicial system in peacefully resolving disputes, preserving stability, and achieving justice in our society. He will discuss the values underlying our system of justice, how it differs from other countries, and what steps are necessary to preserve it for posterity.

Justice Bolick was appointed by Governor Doug Ducey in January 2016 to serve on the Arizona Supreme Court and in 2018 was retained by the voters for a six-year term. Prior to joining the Court, Justice Bolick litigated constitutional cases in state and federal courts from coast to coast, including the U.S. Supreme Court. Among other positions, he served as Vice President for Litigation at the Goldwater Institute and as Co-founder and Vice President for Litigation at the Institute for Justice. He has litigated in support of school choice, freedom of enterprise, private property rights, freedom of speech, and federalism, and against racial classifications and government subsidies.

Justice Bolick is a prolific author of a dozen books and hundreds of articles. Among his most recent books are Immigration Wars: Forging an American Solution, co-authored with former Florida Governor Jeb Bush; and David’s Hammer: The Case for an Activist Judiciary. Bolick serves as an adjunct professor of constitutional law at Arizona State University’s Sandra Day O’Connor School of Law and has served as a lecturer at Harvard University’s John F. Kennedy School of Government.

Peace Through Diversity. Peoria Police Chief Arthur Miller will share his views on justice, peace, and diversity. The word diversity can take on many meanings. Police departments throughout the country are staffed with officers with diverse men and women. Each department is responsible for providing public safety services to diverse communities. Chief Miller’s presentation of ‘Peace through Diversity’ takes a different look at diversity, and will show how diversity within a police department is important to foster positive relations with the communities officers serve.

While with the LAPD, he worked a wide variety of assignments that were a balance of field, administrative, supervisory and management duties. Chief Miller has a Bachelor’s degree in Business Administration and a Master’s degree in Organizational Leadership. He is a graduate of the FBI National Academy, U.S. Army Leadership program, and the California Commission on Police Officer Standards and Training, Sherman Block Leadership Institute. Chief Miller has been involved in law enforcement training throughout his career. He was an instructor at Detective and Supervisor Schools, and served as an instructor for eight years for POST Supervisory Leadership Institute.

Chief Miller is the recipient of the LAPD’s three highest awards for bravery that include the Medal of Valor, the Police Medal and the Police Star. Chief Miller and his wife Linda live in Peoria and have an adult son.

What does Forgiveness have to do with Justice and Peace? We will be having a lively conversation on what forgiveness really means, how this can be applied to a political forgiveness process and how this relates to justice and peace.

As a clinical and political psychologist with over 25 years of experience, Dr. Borris works with emerging democracies, helping nations of people reconcile centuries-old conflicts through forgiveness. Dr. Borris is a former president and a board member of Forgiveness International whose mission is to advance individual and societal transformation through the practice of forgiveness in order to create sustainable peace.

Dr. Borris teaches in the MBA program at the Thunderbird: School of Global Management at ASU in Phoenix, AZ, where she instructs and leads courses in international negotiation, cross-cultural communication, conflict management, and social change.

Dr. Borris is a frequent speaker at the United Nations. She is one of the few individuals that has been invited to give an address in front of the United Nations General Assembly on how to resolve international conflicts and heal nations and gives presentations to the different missions and agencies regarding on the power of forgiveness and the healing of nations.

Dr. Borris is a prolific writer, publishing many articles and books on the topic of forgiveness. His Holiness, the Dalai Lama wrote forewords for both her award-winning books, Forgiveness the Ultimate Freedom, and Finding Forgiveness: A 7-Step Program for Letting Go of Anger and Bitterness (McGraw Hill, 2006). Currently, Dr. Borris is writing her third book Takes Two to Tango: Steps World Leaders Follow to Resolve Conflict. A native New Yorker, Dr. Borris received her doctorate and masters degree in psychology from Columbia University.

Peace is Personal. It starts with one. It starts with me. How do we listen to the voices and stories of those we haven’t heard? How do we posture ourselves to learn another narrative or perspective? And, how do we then live differently? Together we can create a better world, a better story. Let’s begin now.

Lisa Jernigan is an advocate, speaker and trainer for global engagement. She is Co-Founder of Amplify Peace, a global movement which promotes the principles of peacemaking through trainings and transforming encounters, both locally and globally. Focusing on leadership development for women, she travels frequently to the Middle East and Africa to meet and collaborate with faith and community leaders. Lisa lives in Mesa, Arizona with her husband, Cal. Their greatest joy is their two grown children, their spouses and eight grandchildren. Connect at: amplifypeace.com

Mrs. Iisha Graves is the wife of Shawn Graves Sr. and mother of four amazing children. She is a licensed Minister and has been teaching the Word of God for nearly twenty years focusing on children, family and marriage restoration.

She is also a social justice advocate fighting for civil rights and equality for all people through advocacy, leadership in her community and political involvement. She teaches the importance of diversity and offers training to agencies seeking to promote equity and inclusion. Mrs. Graves also understands the equalizing power of education. She holds a Doctor of Jurisprudence degree and uses her legal background and experience to partner with community leaders to ensure education equality and criminal justice reform. To this end, she is a consultant for elected officials and takes pride in how her work can affect lawmaking that promotes equality for our community.

Her passion in these areas keeps her committed to moving forward to see the fair treatment of under serviced adults and youth in her community. She has been a behavioral health coach for the past decade working with our at-risk community struggling with addiction, anger management and the cycle of familial violence. Through years of behavioral health coaching she has seen many lives changed and families restored.

Never one to leave work undone due to lack of laborers she commits her free time to working as a substitute teacher with K-12 graders to ensure there is diversity represented in our Arizona schools. For leisure she is currently working on her first book and expects to release it by the end of year.